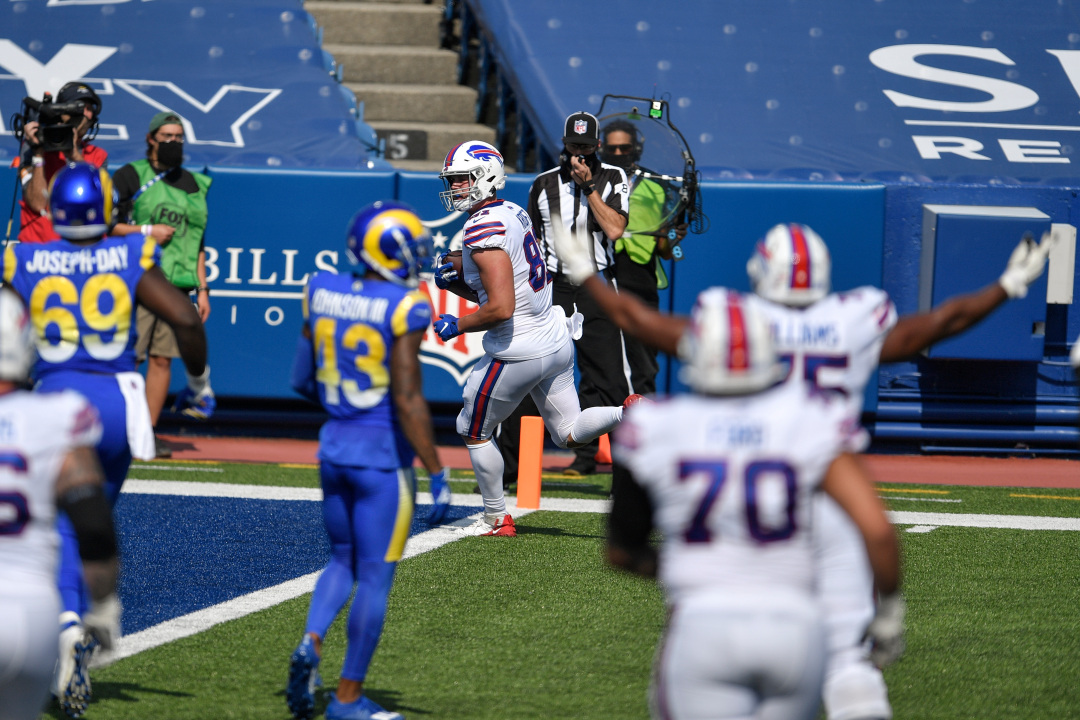 On Episode 6 of the TFINS podcast, we reviewed the offseason moves of the NFC West. Toward the end of the podcast, we also predicted where each team in the division would finish.

I was very critical of the Rams, and I had them finishing last in the NFC West. Through the first three weeks of the season, they have certainly proved me wrong.

This matchup was one of the best games this weekend. The Bills and Rams both had something to prove, as their first two wins were against teams that are far from powerhouse. In my opinion, both the Bills and Rams will make some noise this season if they can stay healthy.

The Bills jumped out to a fantastic start, dominating the first half and snatching a 21-3 lead. The lead ballooned to 28-3 after a Stefon Diggs touchdown catch with 8:05 left in the 3rd quarter. From that moment on, the Los Angeles Rams snapped back to life.

The Rams offense immediately got in rhythm, carving up the Bills respected defense. Los Angeles put together four straight touchdown scoring drives, and suddenly took the lead 32-28. With 4:30 left in the 4th quarter, Buffalo had their chance to answer.

Bills Quarterback Josh Allen put together an impressive scoring drive. Moving his team down the field before throwing a 3-yard TD to tight end Tyler Kroft with 15 seconds left in the game. After nearly blowing a huge lead, it was impressive to see Allen keep his composure and put the ball in the end zone to seal the game.

Both the Rams and Bills showed the type of fight and resolve you like to see in a football team. Both teams played at an elite level, and put pressure on the other. It was truly a great game, and I will have an eye on both of these squads going forward.

This game was about what the Patriots do best, take away your best chance of scoring points, and forcing you to find another way to win. The Raiders came into this game with one of the top young TEs in the league in Darren Waller. The game before, Waller had a stellar game with 12 catches for 102 yards. New England held him to 2 catches and 9 yards.

Derek Carr went 24/32 for 261 yards with two TDs. The main issue with the Raiders this week were their turnovers. Derek Carr fumbled twice, the first led to a field goal and the second was in his own end zone, resulting in a recovered touchdown for New England. Josh Jacobs also fumbled as well in this game. These types of plays just gave the ball back to New England, in which they were able to capitalize.

Cam Newton had a good game, going 17/28 with 162 yards and a TD. The story of the game for the New England offense though, was Rex Burkhead. He had a day, having 6 carries for 49 yards and 2 TDs and 7 receptions for 49 yards and a TD. Sony Michel also had 9 carries for 117 yards. The Patriot Defense did Patriots things as well , like the fumble recovered for a TD by Deatrich Wise and only allowing 2 catches for Carr’s favorite target Waller.

I still actually like the Raiders and think they will have a great season. For the first time in a long time they are playing competent football on offense and have great young defenders like Maxx Crosby and John Abram. I was also extremely impressed with the rookie out of Ohio State, cornerback Damon Arnette. The Patriots play the Chiefs next and will be a great showdown between QBs Cam Newton and Patrick Mahomes, and the Coaches Bill Belichick and Andy Reid.